Tsunesaburo Makiguchi (1871-1944) was a reformist educator, author and philosopher who founded the Soka Kyoiku Gakkai (the forerunner of the Soka Gakkai) in 1930. His life was characterized by confrontation with repressive authorities. As a teacher known for his warmth and consideration, he strove to introduce a more humanistic, student-centred approach to education. He fiercely opposed corrupt educational practices and was forced into early retirement as a result. Later, he was imprisoned for opposing the policies of the Japanese militarist regime. He died in prison from malnutrition at the age of 73. In recent years his humanistic educational theories have been attracting increasing international attention.

For most of his life Makiguchi's central concern was to reform the education system that, he felt, discouraged independent thinking and stifled students' happiness and creativity. He believed that education should serve the happiness of the students, rather than the needs of the state. His educational ideas, and his theory of value-creation (soka), which underlies his pedagogy, are explored in his 1930 work Soka Kyoikugaku Taikei (The Theory of Value-Creating Pedagogy). Makiguchi's views completely contradicted the logic of the militarist government, which sought to use education to mold obedient, unquestioning servants of the state. 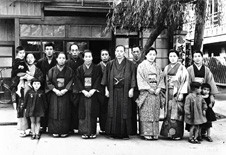 In 1928, at the age of 57, Makiguchi encountered Nichiren Buddhism, finding within it a holistic philosophy that accorded with his own thinking. Two years later, he and his colleague Josei Toda founded the Soka Kyoiku Gakkai (Society for Value-creating Education), the predecessor to the modern-day Soka Gakkai and the SGI. Originally a small group of educators dedicated to educational reform, the Soka Kyoiku Gakkai gradually developed into an organization with a broad-based membership focusing on the propagation of Buddhism. This happened as Makiguchi and Toda became increasingly convinced that Nichiren's philosophy, with its emphasis on the transformation of society through the individual's transformation, was the means to achieving the fundamental social reform that they had been trying to accomplish through their educational efforts.

Meanwhile, in order to garner popular support for its war campaign, the Japanese government imposed the religion of State Shinto, with its nationalistic mythology and ideology of emperor worship, on the populace. It also grew increasingly intolerant of dissent. Makiguchi staunchly opposed these repressive actions. In 1943, Makiguchi and Toda were arrested and imprisoned. In 1944 Makiguchi died in prison of malnutrition, refusing to the end to compromise his beliefs.