Josei Toda (1900-58) was an educator, publisher and entrepreneur who, as second president of the Soka Gakkai, revived the lay Buddhist organization after the Second World War, building it into a dynamic, popular movement. 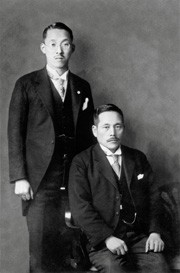 Arriving in Tokyo from the northern island of Hokkaido in his early 20s, Toda found a teaching post at the school where Tsunesaburo Makiguchi was principal. Impressed by Makiguchi's educational ideals, he soon became his protégé. In 1928 he followed Makiguchi in his decision to practice Nichiren Buddhism. The two later cofounded the Soka Kyoiku Gakkai, forerunner of the Soka Gakkai.

As Japan's militarist authorities tightened control over society and suppressed dissent, Toda and Makiguchi were arrested and imprisoned in 1943 for opposing the government's policies. In prison, Toda devoted himself to the practice and study of Nichiren Buddhism, gaining a profound grasp of its

principles. His efforts brought him to a clear realization that Buddhahood is a potential inherent in all life, and deepened his confidence that all people could manifest this enlightened life condition through practicing Nichiren's teachings. 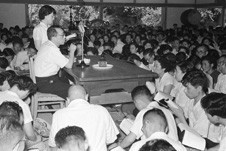 On his release from prison at the end of the Second World War, Toda began to reconstruct the collapsed Soka Kyoiku Gakkai, renaming it the Soka Gakkai (Society for the Creation of Value). Toda taught that through Buddhist practice and inner-motivated change, or "human revolution," all people can change their destiny for the better. This message resonated powerfully among the many people suffering from poverty, illness and other challenges in the chaos of postwar Japan. Moreover, Toda's unshakable confidence in the power of Nichiren's philosophy and his ability to translate the profound concepts of Buddhism into practical guidance for daily life re-ignited people's hope and courage. By the time of his death in 1958 Toda had built an organization of nearly one million members and laid the foundation for the dramatic spread of Nichiren Buddhism in Japan and abroad. 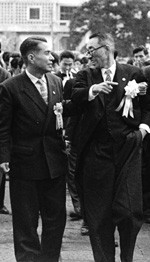 Toda is also remembered for his uncompromising stance against nuclear weapons, which he termed an absolute evil that threatens people's inalienable right to life. He urged the youth members of the Soka Gakkai to work for the abolition of nuclear weapons. This stance, which he declared in 1957, is considered the inspiration for the SGI's peace activities. In honour of Toda's ideals, his successor, SGI President Ikeda, founded the Toda Institute for Global Peace and Policy Research. The institute brings peace researchers, policy-makers and community activists together on projects related to peace-building and dialogue among civilizations.